Let’s start with getting familiar with the basics of moving around RStudio and some of the basics of R itself. Go ahead and launch RStudio!

Get Familiar the Basics

We’re going to walk through some basics so you get a good sense of the different areas of the environment:

Let’s start with some simple math. In the console, type 12^2 and press

Now, let’s actually assign a value to a variable from the console by typing my_var <- 12^2.

In R, assignment of values uses <-.

Look in the Environment tab in the top right pane, you should now see your variable: 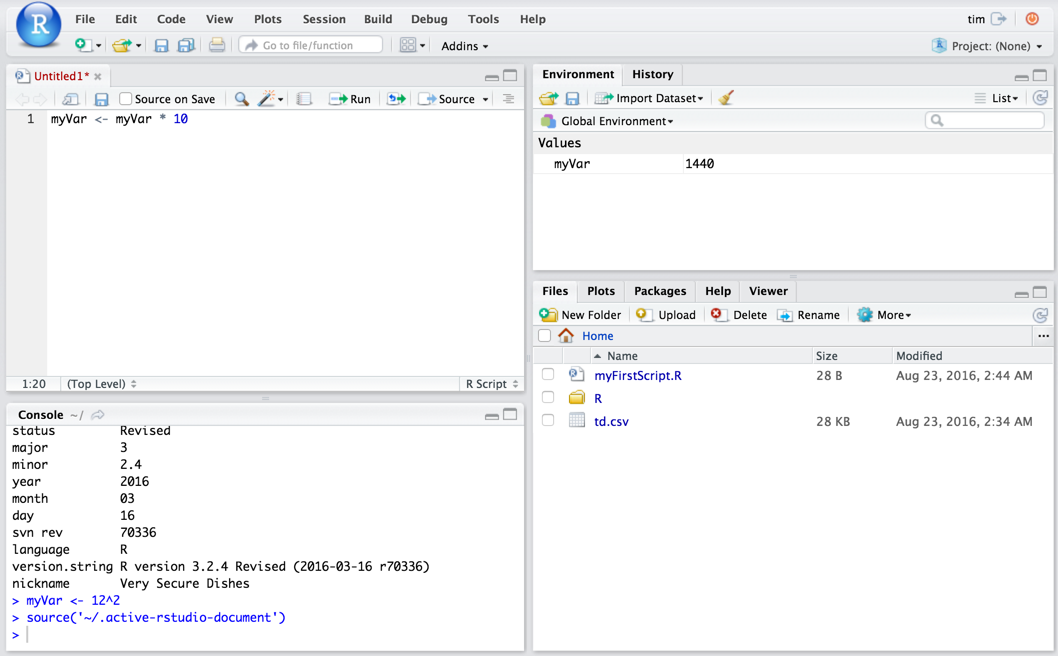 You’ve just created a variable and stored it in your working space…even though you haven’t actually created a script! So, let’s do some work with our script.

In the top left pane, enter my_var <- my_var * 10. Nothing will happen, because this is just a script. It hasn’t been executed yet. Click Source to run the script. Now, check out the Environment tab:

This is a simple illustration of working in both the console and the script to work on the same environment.

Two key concepts here (we’ll dive deeper into these in a bit):

So, let’s do a little work with vectors:

What if we wanted to cube each of these values? Type my_vector^3. This is an operation performed on an entire vector. It’s not particularly exciting in this example, but it shows one of the fundamental aspects of R that we will come back to again and again. What we did not have to do was “loop through the vector and cube each value.” Rather, we performed an operation on the entire vector and we did it all at once.

Type typeof(my_var). typeof is a function that returns the type of an object.

Type typeof(my_vector). Note that it is the identical type as my_var.

Now, type length(my_var) and then length(my_vector). Note that this is where the two objects differ.

We’ve now worked with c(), typeof(), and length(). These are all examples of…? Functions! That’s just the beginning!

We’re going to do a few things here that wouldn’t exactly be how you would work typically. But, that’s okay:

Get Our Sample Data

Download the .csv file here. Pay attention to to where this file – td.csv – gets stored.

If you are running RStudio from a web browser, then go to the Files tab in the lower right pane, click Upload File, and upload td.csv. You should now see it in the Files tab.

If you are running RStudio locally, then type getwd() in the console, make note of the file path that it returns, and then use Finder / Windows Explorer to move td.csv to that location.

Set Up an Empty Script

We’re going to create an actual script now, so either just delete everything in the script you originally created or select File>>New File>>R Script. Either way, then select File>>Save and name the file myFirstScript. The script is being saved in your working directory and now appears – along with td.csv in the Files tab. Now, let’s start writing some script!

Load up a Data Frame

The first thing we want to do is load our data into a data frame. A data frame is, essentially, just a table. Let’s call our data frame ga_data and load the data from td.csv into it. We use the read.csv() function (another function!) for this, so add the following line of code to your script (loading data is something else we will get into in more detail later:

That stringsAsFactors = FALSE is something you will run into quite a bit in various functions. Let’s just ignore it for now.

We can go ahead and run this script. Go ahead and click Source. It doesn’t look like much happened, but, if you now check your Environment window, you will see a new object called ga_data. Double-click on that, and the ga_data data frame will load in a new tab next to your script.

We’re going to hop back down to the console to explore some of the most common ways we can access data in a data frame.

Type in ga_data in the console. This will simply quickly scroll through all of the contents of the data frame.

Sometimes, we just want to see the basic structure of an object – we don’t need to see all of the data. For that, try head(ga_data). This shows just the first few rows (and head() is a function; type ?head() to read the help for it!).

We will get into the many different ways to access this data accessing.html, but it’s worth a quick exploration of some of the most common ways.

Let’s look at just the sessions column. We do that using $ notation: try ga_data$sessions.

Since the data frame is made up of rows and columns, we can also access values using a row/column notation (similar to R1C1 notation in Excel). To view the value in the 5th row and the 3rd column of the data, type ga_data[5,3].

We can also use this notation to grab an entire row or an entire column simply by using the row or column index blank. To grab the entire 5th row, type ga_data[5,].

Using this same notation, we can also add conditions to pull subsets of the data. For instance, to view all of the rows where there were greater than 100 sessions, enter ga_data[ga_data$sessions > 100,].

We will come back to visualizations later, but let’s at least add a simple line chart of sessions by adding two lines of code to our script.

The first line converts the date values to, well, actual date values. Dates can be tricky, but there are a lot of tips and tools (and even a package called lubridate() to help with that):

The second line we’ll add will actually plot the data. There are shorter ways to write this out, but let’s go with this:

Now, you can either highlight just the two new rows and click Run, or you can click Source to run the entire script. The end result will be a barely-formatted, ugly label line chart: 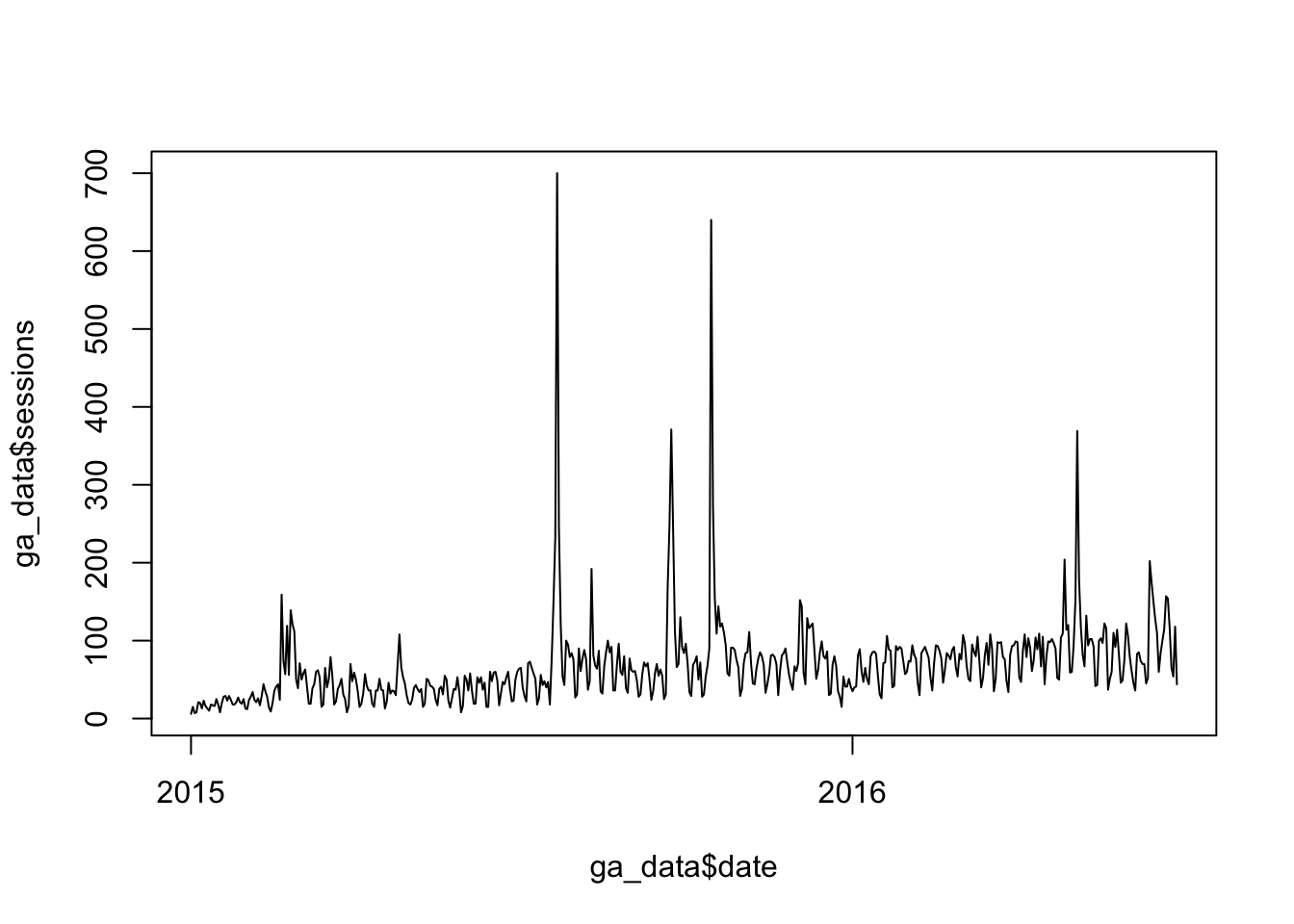 Don’t judge a platform by your first visualisation. Even with the basics of plot(), this chart can be a lot better, but we’re actually going to primarily focus on ggplot when it comes to visualisations. So, let’s call this initial exercise a wrap! Congratulations! You’ve loaded, manipulated, and plotted data with R!